The members of the Early Warning Europe Expert Network came together in Brussels on 10 October for their 12th and final meeting, which focused on the emotional and psychological aspects of insolvency and the mental health of entrepreneurs. 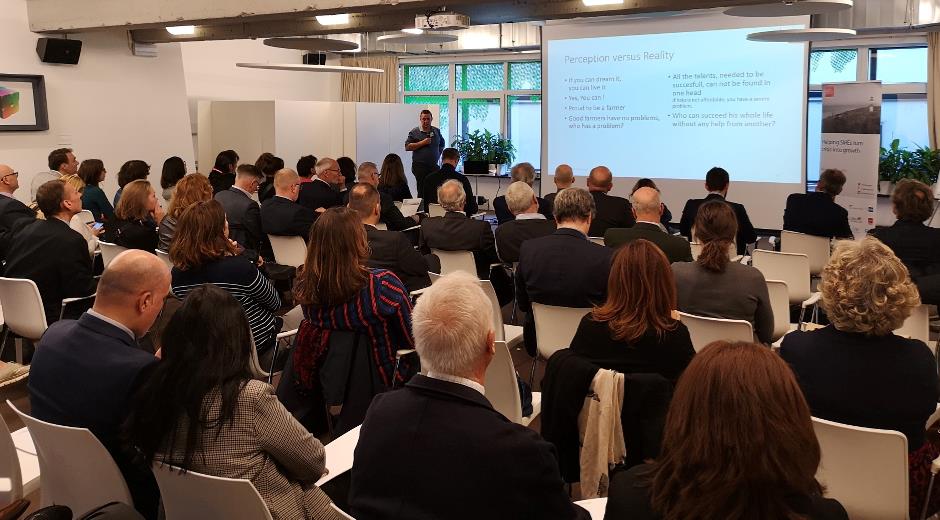 The members of the Early Warning Europe Expert Network came together in Brussels on 10 October for their 12th and final meeting, which focused on the emotional and psychological aspects of insolvency and the mental health of entrepreneurs.

This final Expert Network meeting was attended by representatives from the project partners, experts as well as some 40 Mentors from 6 countries, who were taking part in the 'Mentors’ Day' of the Early Warning Europe project.

The first presentation was made by Riccy Focke from Boeren op een Kruispunt (‘Farmers at a Crossroads’) which provides support to farmers facing difficulties in Flanders (Belgium). The organisation works with experienced psychologists who are aware of the specific needs and problems faced by farmers, who often feel themselves to be isolated.

Psychologist Agnieszka Czajkowska-Wendorff spoke about the positive impact of the Early Warning Europe project in Poland, where the Family Business Foundation has developed a network of mentors and trained them to work with entrepreneurs facing difficulties. She said that the entrepreneurs expect mentors to show empathy as well as competence and knowledge. Mentors must be able to listen and give advice, but also to motivate and empower their mentees. Having the capacity to resolve conflicts is also important.

Professors Jan Adriaanse and Jean-Pierre van der Rest from Leiden University in the Netherlands presented the results of a major study on 'The story behind bankruptcy: when business gets personal'. Their research found that business failure is a phenomenon with profound personal and social consequences, and the negative experience of bankruptcy means that many entrepreneurs are discouraged from trying to start again with another new business.

Dr Edwin Weesie from the University of Applied Sciences in Utrecht (the Netherlands) presented the results of his research on psychological barriers in business transfer, which looked at how entrepreneurs react when their business is bought out or taken over by a larger company.

During the discussion, the participants agreed that the mental health of entrepreneurs is still treated as a taboo topic in most European countries. Therefore it is important to raise awareness and encourage more open discussion about problems faced by entrepreneurs, but also to provide support services in a positive way that will allow entrepreneurs to access help without feeling too embarrassed or uncomfortable.